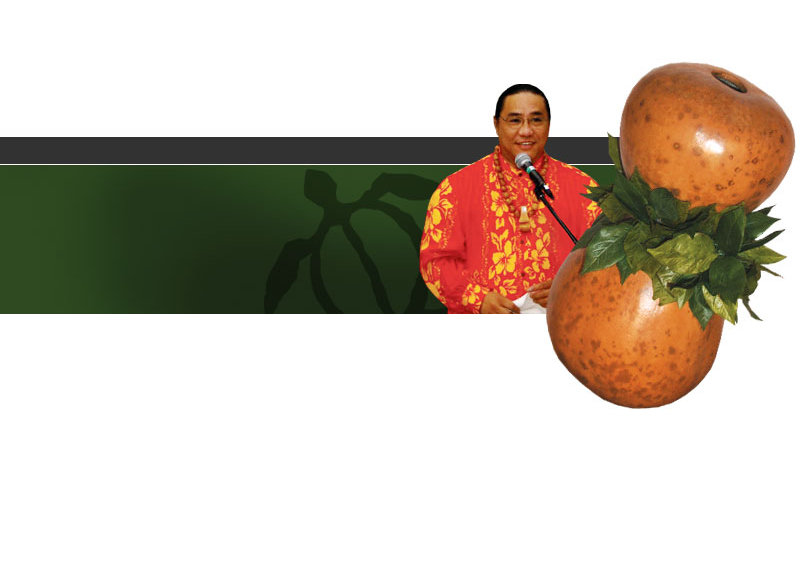 Halau Ho'omau I ka Wai Ola O Hawai'i
Ke Kumu
Manu Ikaika (aka Manulele) was born and raised in Honolulu, Hawaii. Manus father, Charles Ikaika Strong, a full-blooded Hawaiian, was an accomplished musician who performed with various groups at locations on Oahu during the 1950s through the 1970s. He also managed his own group, the Exotic Polynesians, which performed at the Sheraton Hotels luau and various restaurants and private parties.

In 1958 when Manu was only 3 years old, his father enrolled him for formal training in Honolulu under John Piilani Watkins, the renowned Kumu Hula (master hula teacher), composer, and recording/performing artist.
Some of Watkins famous songs are Waikaloa, Me Ka Nani Ao Kaupo, Hana No Ka Oi, Ipo Kukui Ao Mao Mao, Hana Paradise, and Pearl Harbor. Watkins credits include head musician/choreographer in the 1955 Broadway production of "Paradise Island" starring Guy Lombardo and June Taylor, appearances on the Dinah Shore television show, and performances at the Makaha Inn and Sea Life Park on Oahu.

In 1964 Piilani Watkins graduated Manu through an uniki  the Hawaiian culture graduation ceremony. Manu then became a member of the American Guild of Variety Artists and went on to perform professionally in some of the most prestigious hotels in the islands, while continuing to further his education in Hawaiian and Polynesian culture from other well-known Kumu Hula and Hawaiian entertainers. Over the years Manu has toured and performed in Hawaii, the Mainland, Japan, Korea, Canada, and Puerto Rico.

After moving to Virginia, Manu continued his studies under Kumu Hula Harold Dole "Mahealani" Bailey. Mahina, as he was known, was the distinguished founder and master of the traditional Halau Hula Mahina O Wakinekona DC from 1985 until his death in 1999 and leader of his own performing troupe  Mahina and the Polynesians.
Bailey was a descendant of both Hawaiian chiefs and the Bailey missionary family of Maui. He had received formal hula training from his earliest youth from two well-known Kumu Hula of the 1920s, tutu kane (grandfather) Kaua Kupihea and tutu wahine (grandmother) Maleka, and renowned musicians Abigail Pililaau and Rachel Kaleiwahea.

Mahina also studied under his maternal aunts Kaena Kinikeoki and Jenny Wilson  who had studied hula at Kamehameha School and were dancers in the royal court of King Kalakaua  and his grandmother Libby Napuloo and great-aunt Kula Akiu. Libby and Kula were descendants of Chief Alapai Nui, a ruler of the Big Islands Kona District. The knowledge and spiritual aspects of hula and Hawaiian language, music, and oli were thus passed directly to Manu through Mahina, who had received them from these Hawaiian elders.

On May 8, 1999, during a Halau Hula Mahina benefit luau, Manu received his official certificate as a Kumu Hula, signed by Kumu Hula Mahina Bailey. Prior to this occasion, Manu participated in a rare ritual and traditional Hawaiian ceremony of uniki rites (graduation) in Milolii, Hawaii. In former times, a Kumu Hula was not issued a certificate, but the tradition of passing on the chants and dances is now more formalized and only a recognized Kumu Hula may bestow this title on a student.

Prior to becoming a Kumu Hula, Manu held such halau positions as hoopaa, olapa, alakai, haku mele, pa hula, and kahu. In addition to being a Kumu Hula, Manu is also a composer and choreographer of Hawaiian music and dance, a skilled artisan of Hawaiian crafts, an accomplished musician - proficient at bass, slack key, steel guitar, ukulele, drums, Tahitian drums, and the ancient Hawaiian instruments of the ipu heke (double gourd), ohe hano ihu (nose flute), and pahu (sacred drum). He is also trained in the spectacular Samoan fire knife dance and in his youth was one of Hawaiis leading dancers in this specialty.

Manus performances in the Washington metropolitan area include the Kamehameha Day Ceremony at Statuary Hall in the U.S. Capitol, Presidential Inaugural Parades, the Washington Monument, the Smithsonian Institution (including the National Museum of the American Indian), the Kennedy Center, the Barns at Wolf Trap, and the Birchmere. He supports many Hawaiian cultural events for the U.S. Congressional staff and the Office of Hawaiian Affairs in Washington DC.


A personal note from Manu Ikaika

Mahalo piha to my lovely wife Suzanne for her continuous love, support, and guidance, to my family and friends, Halau members past and present for their kokua and aloha, and to all those listed below with whom I've performed or worked with over the years. You have given me the strength, knowledge, love, friendship, and inspiration to continue! If I've missed anyone, e kala mai ia'u."